There’s Someone Inside Your House- Promising Potential But Disorderly Delivery

Oftentimes there are films that have a very promising premise and plot but do not quite deliver the same. There are many loopholes at work in such cases. Sometimes it might be the fault of the director while sometimes the build-up might not have matched the expectations of the audience. In the case of There’s Someone Inside Your House, the movie we are going to talk about today was the bland presentation that did not quite work out for the movie or its audience.

There’s Someone Inside Your House Is a movie pertaining to the horror genre. Or at least that’s the vibe it gives off at first period later on you find out that it’s more of a thriller than a typical horror movie with supernatural elements. Now, you could give it a watch if you want to. But if you are looking for feedback on the film so as to fuel your decision-making regarding whether or not to watch the movie, then you have come to the right place. Keep scrolling and you will get an idea about what the movie really is about, what went wrong, and most importantly, whether it is worth investing time in it or not. 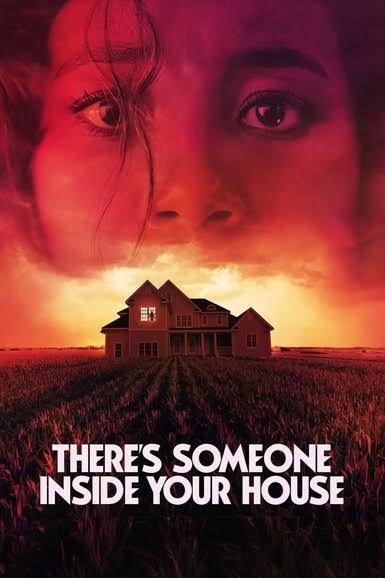 The movie is set in fictional Osborne, Nebraska. It revolves around a group of young adolescents who go to the same school in the small town. The story concerns itself with the lives of these teenagers and their various misadventures.

The discourse of the plot goes somewhat like this- there is a certain individual who has access to almost all The Dirty secrets of these students. This individual visits their victims wearing up a 3D print-out mask of the face of the victims, killing them, and exposing them at the same time.

One of the few early victims of this individual was Jackson, an ace football player in their school team. He and some of his friends were involved in a hazy ritual that had gone a bit too far. This individual, whoever it was, somehow had gotten hold of a recording that could destroy the image of Jackson and his friends forever. This is one of the few of the first murders that take place in the movie, following which, the course of the movie remains almost similar, with the exception of a new victim every time.

Now, who was it that was going behind everyone’s back and committing all these murders, and who was it that had access to all these secrets of these people? Well, I would not want to give away any spoilers. So, it’s for you to find out.

I’m not saying that all of it was bad. There were some very traditional and interesting perspectives used in the film. The plot of the movie itself is quite classical but the modern elements used in it give it a certain fresh look as well. The setting has a post-Stephen King aura, which works out perfectly for the plot.

However, there are some major loopholes. A very problematic issue that the movie exhibits all through its running time is the half-hearted and fast development of the plot. There is not one moment in the film where you can stand and properly appreciate the efforts that might have gone in. Before you can really grasp what is going on the movie gets interrupted with yet another murder sequence. This is the same reason why none of the characters feel well developed in the film. The moment the plot starts to tell the story of a character, boom! He or she is already dead or at least fighting the murderer.

Another frustrating element that places all through the show time is the deliberate and unnecessary “woke-ness” they keep on trying to introduce in the story. The thing is, not every show NEEDS to have LGBTQ plus characters, or characters from the discriminated sections of society. And if you do introduce such characters, you need to keep in mind that their lives are not as bland as just another one of their white counterparts. Almost all the time they have some stories to tell and some incidents that shape the person that they are at the present. Putting in such characters and yet not throwing enough light on that aspect of their existence is as disrespectful if you ask me.

Moreover, there is literally 0, or at best forced chemistry between the characters. The chemistry is lacking not only between romantically involved characters but amongst the others as well, again, as the audience did not have enough time to be acquainted with the characters as a result of which they never really fleshed out as much.

For a story that claims that it is going to educate its audience about privilege, There’s Someone Inside Your House could have done a lot better. The masked man (or woman) was killing his victims (spoiler alert) trying to spread a message about privilege and the insensitivity that the privileged sections often harbor, often unknowingly. The plot seems very fancy, but the movie seriously underdelivers. Though still an averagely good option for thriller lovers, not something to harbor too much hope in.

There’s Someone Inside Your House- Promising Potential But Disorderly DeliveryOftentimes there are films that have a very promising premise and plot but do not quite deliver the same. There are many loopholes at work in such cases. Sometimes it might be the fault of the director while sometimes the build-up might not have...