Sally Rooney’s novels are fascinating fresh publications that offer a 21st-century take on insecurity and many other such emotions that are essential to coming-of-age stories.

Normal People is a compelling, emotionally observant love tale starring two of the most compassionate characters you’re likely to encounter between the pages. Despite being recognized as a millennial voice, Rooney has something to offer readers of all generations and genders. 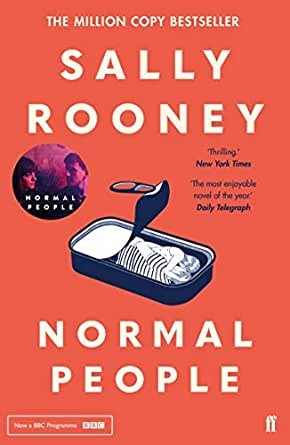 All of us are fighting our own battles. Even if things seem good on the outside, it’s not always the case inside. Sometimes even we might take time to understand what is it that we are suffering from or even the fact that we indeed are suffering in the first place. Connell falls under the latter group of people. While in school, he and Marianne are stark opposites. He is the star of the school soccer team, one of the popular kids in school, while Marianne is the lonely weird kid who eats by herself during recess and keeps to herself. Her situation has caused her to become haughty and arrogant. Connell and Marianne stray clear of each other, until one day Connell comes to pick her mother up from her housekeeping job from Marianne’s house.

The first time that their paths crossed soon turned into eternity as with time, their paths and lives got more and more tangle with each other.

After a year, school ended, and Marianne and Connell went on to pursue their college, segregating their geographical roads, only for the roads to their destiny to become more strongly bound together. Connell had maintained a secret relationship with Marianne throughout school, not disclosing their relationship to anyone at school fearing being an outcast along with Marianne. In college, things seem a bit different from school.

Turns out once Connell steps out from the high school kingdom, he is no longer the king he thought himself to be. Marianne on the other hand has found her social sphere and now leads an almost stable life. Connell gradually gets sucked into depression and struggles to figure out his place in the real world. He starts questioning everything that has happened to him so far. He does not understand when exactly things started going downhill and wonders whether he was always this shy and insecure person, but simply had missed out on this detail earlier.

Life happens to Connell and Marianne and both struggle to keep up with it. Marianne is often haunted by her past and her general coldness and indifference towards people and wonders whether that holds back others from genuinely loving her. Connell’s struggles with the present, and his efforts to connect the present to the past as he tries to figure out what he wants for his future continues. Tired and heckled, they circle back to each other (despite some occasional digressions) and become the shoulder and the comforting hand that the other seeks.

Read More: Three Women- a Tale of Exploration and Oppression

Marianne is a brilliant and rich girl in high school, but she is socially and emotionally mistreated at home, causing her to develop an indifferent attitude towards most people, whereas Connell is working class but highly popular. Connell’s mother works as a housekeeper for Marianne‘s family. They begin a covert carnal relationship, which comes to an end when Connell worries his friends might discover it. The tale is driven by their fascinating dynamic; problems of class and social position generate considerable friction.

In a society that is becoming increasingly integrated via various means, there is strong criticism of our continual drive to impress others and perform for others. Peer pressure and expectations that society has from us are to blame for most of the catastrophe that befalls Connell and Marianne. It’s heartbreaking to consider that someone may give up on someone they care about because they fearing the fall of their position. It sometimes becomes frustrating considering all the little things that go wrong in the lives of Marianne and Connell and how those little things result in immense and intense tragedies that find a permanent impression in their lives.

That’s the thing about the book though. It is so fantastically frustrating and this frustration is proof that the reader has slowly but surely started caring for the characters of Connell and Marianne. The characters have so many unlikeable traits and seem so ideally clichéd initially that it could easily make a reader steer clear of the book. However, as the novel progresses, all of their traits are accounted for. The characters are explored in-depth and we get sufficient insights into why they act the way they do.

Now, one thing that must be understood is that the book is not for everyone though. For some, the proceedings of the book might seem extremely slow and the conclusion may seem very meaningless. The constant on and off relationship between Marianne and Connell and their seasonal indifference towards and possessiveness over one and another might feel irritating to some. But this sense of instability, indecision, and eventual frustration is probably what Rooney wanted to get across to the readers in the process of making life dance on the pages of her novel- a life that only a sensitive reader would be able to perceive.

The depressing and predominantly grey aura might take a toll on the readers at times. Except for that though, the book is surely worth a read. It’s a coming-of-age novel with so many issues involved, showing vividly the dynamics of the relationships of our lives and how disturbance or stimulation in one inevitably affects the others.

The book is not something you might want to read if you are in a bad place at the moment. The characters and situations become so lifelike that it becomes difficult for the readers to maintain discretion. If you are willing to read up on people and how life affects some of us, then sure! Go ahead! (PS- also look out for the book’s Hulu adaptation).

Normal People- A Nuance and Vivid Piece about Life Entanglements and MoreSally Rooney's novels are fascinating fresh publications that offer a 21st-century take on insecurity and many other such emotions that are essential to coming-of-age stories. Normal People is a compelling, emotionally observant love tale starring two of the most compassionate characters you're likely to encounter...