The Percy Jackson series made quite a buzz in the literature world. Written by American author Rick Riordan come on the series attempts to acquaint the young generations with Greek and Roman mythology by portraying them in a contemporary light.

Mythology is not the first genre that comes to mind while discussing books. Most of us who label ourselves as bookworms choose novels or stories that help us evade the grey reality of our everyday lives. So most of the stories on our shelves would be science fiction, romance, and such.

Mythology if you think about it is not that far from fiction though. That is exactly what Rick Riordan’s books attempt to make the young readers realize. Rick blends old mythological stories with the adventures of a young boy and his squad, thereby putting in all the ingredients that a young teen would like in a story.

The Percy Jackson series follows the adventures of a young boy named Percy, short for Perseus Jackson. This boy is a Demi-God. This means that the boy has a parent who is a God and another parent who is a human. In the case of Percy, he turns out to be the son of the mighty God of the sea, Poseidon.

The series follows the journey of the young lad as he struggles to maintain as normal a life as is possible for a demigod in a world of humans. As soon as this covers the fact that he is a demigod his troubles start to rise. At first, he is prophesied to be the boy who would bring down the empire of the gods. Many times it so happens that gods who do not have that much of a good equation with his father, Poseidon, try and take out their anger on the boy. He and his gang go through adventures of all sorts, fighting demons, escaping the wrath of the gods at times, and all in all just trying to stay alive.

The review you are about to read through is that of “Percy Jackson and the Greek Gods”. This book is not directly a part of the entire Percy Jackson series but has the boy as its narrator, as in all the other episodes of the series. This particular book is different from the others in the series in its plot as well. In the other books, Rick does not directly attempt to acquaint his readers with Greek mythology, giving subtle hints and remarks about the gods and goddesses here and there. However, with this book, he traces the entire Greek mythology, in a fun and contemporary tone and lingo.

The book opens with how the world was created from utter Chaos. At first, there was nothing but Chaos. Chaos then created Earth, Gaea. Gaea soon got lonely and asked for a companion. Chaos then created the Sky, Ouranos. Even though the other primordial gods that Chaos had created tried to get cozy with Gaia now and then, Ouranos and Gaea had a pretty neat time courting each other. However, things started to go downhill as soon as Gaea gave birth to her first set of children. Gaia gave birth to a batch of 12 children- 6 girls and six boys. These kids looked kind of like humans but were way taller and stronger. They were called the Titans.

Ouranos started spending lesser and lesser time with Gaia. Like any other average marriage, they guessed that things would probably get better if they had more children. Needless to say that it was quite the contrary. Gaia gave birth to triplets – these triplets were big on strong but brutish and hulking too. They were named the elder cyclops. Ouranos could not handle the sight of them and soon came back with James and through the elder cyclops into Tartarus, a bit like the sky, but at the bottom of the earth.

A new set of kids followed after that, but they were more monstrous than the elder cyclops. They had 100 arms, and they were all around the chests. And they also had 50 tiny heads clustered on their shoulders. They also suffered the same fate as the elder cyclops.

This was too much for Gaia to absorb. She summoned the hardest substance that she could find from her earthly domain and created the first-ever weapon – a scythe.  This was her weapon for revenge. She asked all of her children as to who would be brave enough to overthrow their father and be the new ruler of the universe.

Kronos, the God of Time, stood up. He was the youngest out of all his siblings and never quite taken that seriously. That was to forever change though.  He took the weapon, devised a master plan, and got rid of Ouranos once and for all. Kronos was the new Lord of the Universe and the Scythe was his weapon.

Kronos assigned various locations of the world to all of his siblings and assigned them their fields that they were to overlook for the better functioning of the world. He went on to marry Rhea, one of his siblings (yes, gross, but it is what it is). Gaia felt she had found a good leader who could correctly rule the universe. She thought she could retire and take a break.

Everything was going fine, except for inside the head of Kronos. It was prophesied that the children of Kronos would be the reason for his downfall, in a similar pattern as that of the death of Ouranos. However, Kronos had moved past that prophecy and wanted to give domestic life a short. However, things got pretty ugly once Rhea and Kronos started having babies. The babies were much taller and stronger than their Titan parents. This was more than enough to get Kronos to go crazy. He swallowed the kids one by one as Rhea kept presenting them to him, except for the last one, Zeus. Gaia guided her to Cretes and gave her directions on how she could save him and how he would return and save his other siblings.

Fair enough Zeus grew up to be a handsome young man. He heard all about how his father treated his mother and how he swallowed his siblings from Rhea. He then devised a plan that would let him get close to Kronos, without him suspecting a thing, and on the first chance, he would kill his father and rescue his siblings from his gut. The plan was a success and that is how the Greek gods as we know them today came into being. They all were assigned different fields and corners of the world that they would look after thereafter.

A long war between the Titans and the gods had followed after that. The palace of the Titans on Mount Othrys got destroyed in the war, making Olympus the highest mountain in Greece. Mount Olympus became the residence of the Gods thereafter. 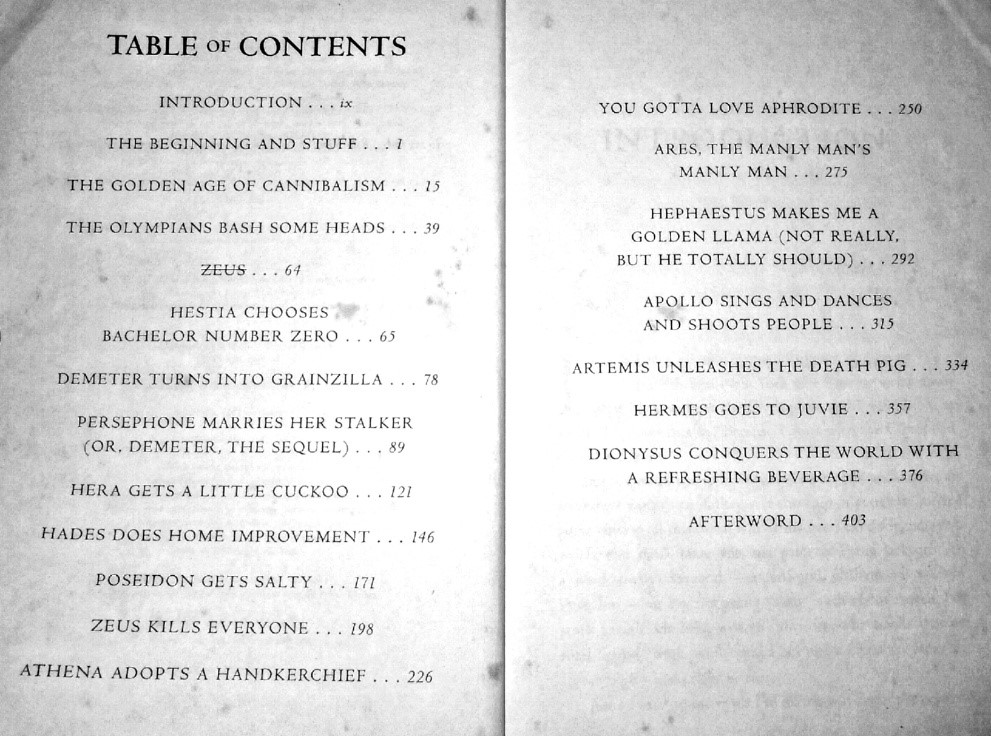 The book traces the stories of these gods vividly. It talks about how Atlas ended up holding up the entire world, how Persephone came to marry Hades, why Poseidon and Athena just cannot stand each other, and so on.

The best part about the book is its informal tone. While most mythologies attempt to stall the gods and goddesses, putting them way about us, Rick shows these gods in a more human light. They commit mistakes that humans would, indulge in personal and childish bickering, and at times are even irresponsible with the jobs that they are assigned.

The book overall has been a good experience. It educates you but keeps the fun alive. At an age when people are increasingly resorting to visual forms of media, attempts such as Rick Riordan’s “Percy Jackson and the Greek Gods” serve as good initiatives to bring back the millennial audience to the pages. If you are looking for a fun read that would also give you some actual information then this would be a perfect choice.

“Percy Jackson and the Greek Gods” is quite engaging in its development, writing style, and matter. If you’re looking for a fun read then this is it.

Percy Jackson and the Greek Gods- A Beginner’s Guide to Greek MythologyThe Percy Jackson series made quite a buzz in the literature world. Written by American author Rick Riordan come on the series attempts to acquaint the young generations with Greek and Roman mythology by portraying them in a contemporary light. Mythology is not the first...